Changing the Narrative on TV: Modern Portrayals of Native Americans

Presented In partnership with SAG-AFTRA Native Americans Committee
Native Americans on television have often been represented as historical people in different iterations of dramatic period pieces. Television is finally changing that trend with new shows to tell the stories of Native Americans as they are today. Modern Native American characters are a welcome relief for Native creators, executive producers, actors as well as casting directors who join this special discussion focused on Peacock’s Rutherford Falls, the FX show Reservation Dogs and other series breaking the mold for Native American representation. 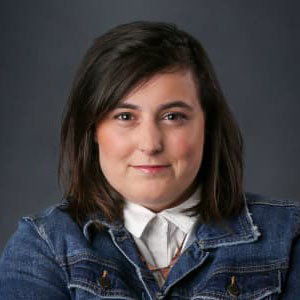 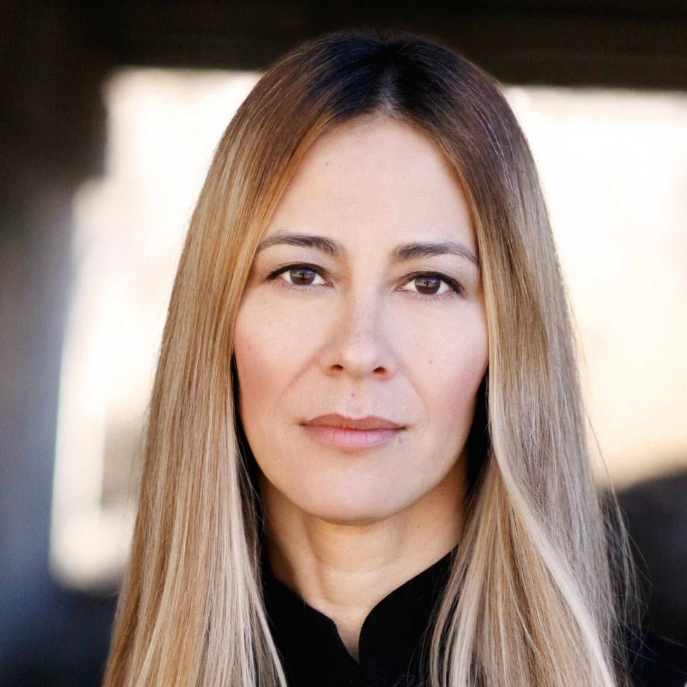 Angelique Midthunder began her career in casting in the mid-1990s after briefly working overseas as an actress and discovering an intrigue for the casting process. Angelique has developed an expertise in casting Indigenous content and prides herself on preserving authenticity and integrity in cultural casting while recognizing the value of creative freedom. In 2010 she was nominated alongside Richard Hicks and David Ruben for an Emmy for “Outstanding Casting for a Miniseries, Movie or a Special” for Georgia O’Keeffe - and in 2017, she was nominated alongside Jeanne McCarthy for an Aritos Award for Captain Fantastic. She is a current member of the Casting Society of America (CSA) and the Academy of Television Arts & Sciences. 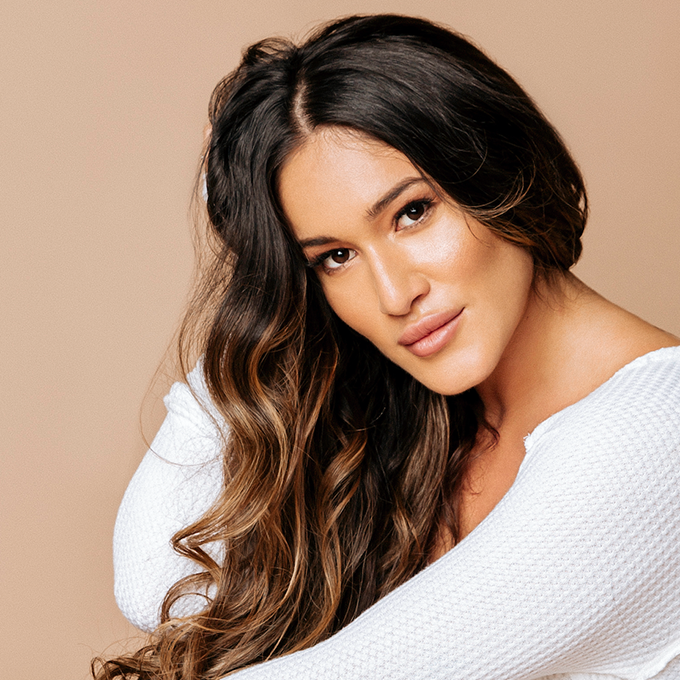 Q'orianka Kilcher recently completed shooting the role of 'Niki' for the upcoming MGM feature film, Dog opposite Channing Tatum. She can currently be seen as Angela Blue Thunder on Taylor Sheridan's acclaimed western series Yellowstonefor PNC. Before that, Q'orianka played Inca Princess Kawillaka in the Paramount Players feature film, Dora the Explorer. She starred as Mary Palmerin the Golden Globe-nominated series from Anonymous Content, The Alienist, opposite Daniel Brühl, Luke Evans, and Dakota Fanning. She also played opposite Christian Bale in Scott Cooper's Hostiles. Q'orianka starred in the title role of the film Te Ata, based on the life and career of the Native American trailblazer, Te Ata, which debuted in Toronto last year. Q'orianka is most well known for her portrayal of Pocahontas opposite Colin Farrell and Christian Bale in Terrence Malick's film, The New World. Her performance was critically acclaimed and won her the National Board of Review's best breakthrough performance, the Alma Award for best Latin American actress in a feature film, and numerous other award nominations. Recent acting projects have given Kilcher reasons to believe that current images in media can begin to overcome negative stereotypes promulgated over decades on the big and small screens. We don't constantly ride on horseback. We're lawyers and doctors and drive cabs, and that begins to break down the stereotypes. In movies in the past, we're savages. Humanizing and being relatable is a step in the right direction. 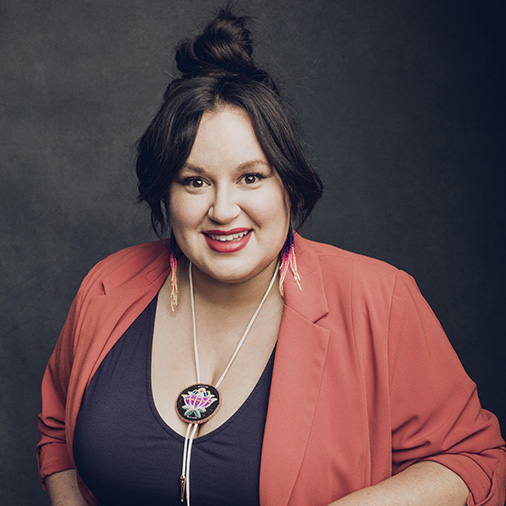 Jana Schmieding is a true multi-hyphenate star on the rise, who is making her mark on the entertainment industry as an actor, writer, comedian, and content creator. A Lakota Sioux Native, Jana has been a longtime educator and advocate, raising awareness around Native issues and bringing Native stories to mainstream audiences. Jana can currently be seen as the female lead opposite Ed Helms on Mike Schur's new comedy series, Rutherford Falls. She also serves as a staff writer on the series, which launched on Peacock on April 22, 2021. The first Native comedy of its kind, the series will explore themes of identity, friendship, and how we define ourselves and relate to historical narratives. Jana was heavily involved in all aspects of the show, including down to the details of beading items for the costume, props and marketing departments. A graduate of the University of Oregon, Jana has performed and directed improv, sketch and solo comedy for over a decade in both New York and Los Angeles. One of her pilots brought her to The NYTV Festival as a Notable Writer. In addition to being passionate about Native visibility, she has also been a vocal advocate for social justice issues, namely body justice all of which she discusses regularly in her comedy and writing. Jana hosted the acclaimed Woman of Size podcast from 2017-2019, where she and guests discussed the way we think and talk about our bodies. She currently resides in Los Angeles with her two cats. 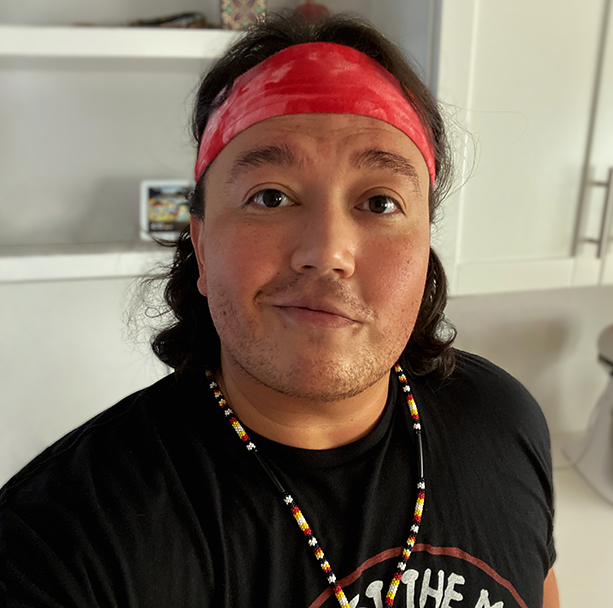 Lucas Brown Eyes is a Native American (Oglala Sioux tribe) TV writer and comedian from the Pine Ridge Reservation. He always dreamt of making Tv. In fact, his Native name is "Wawo Yaca Wicasa" which is Lakota for "the story teller". So, destiny may be working a little on his side. I don't know, I'm just a bio paragraph. Lucas was raised by his mother, grandmother and aunt along with his brothers and cousins. They all lived in the same house because his mother always said that strong family values are the Lakota way, but he secretly suspected it was because they were broke. But what his family lacked in money they made up for in support. In 2003 they moved to California so Lucas could study Film & Tv at Orange County High School of the Arts. He would then get a degree in Cinema-Tv Production from USC. In 2014 he was accepted into the ABC Disney Writing Program. Since then he has staffed on over 100 episodes of tv for Netflix, Fox, Freeform, Disney, PBS, and HBO Max. As well as selling pilots to Fox and PBS. 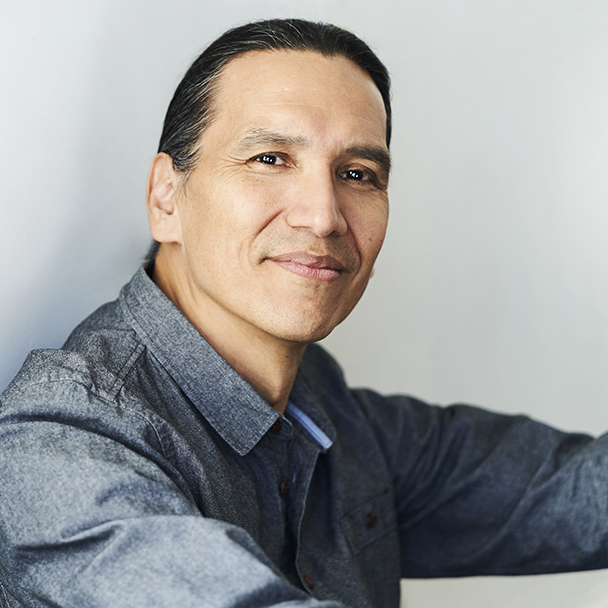 Michael Greyeyes is a multi-hyphenate talent - actor, director, choreographer, and scholar - whose diverse career from stage to screen spans over 25 years. He currently stars in the thriller Wild Indian, the feature debut by writer/director Lyle Mitchell Corbine Jr, which premiered in competition at the 2021 Sundance Film Festival. The film follows two Anishinaabe men who are inextricably bound together after covering up the savage murder of a schoolmate. After years of separation following wildly divergent paths, they must finally confront how their traumatic secret has irrevocably shaped their lives. Greyeyes received rave reviews from critics for his gripping portrayal of Makwa/Michael. This Spring, he will be star opposite Ed Helms in the new Peacock comedy Rutherford Falls. Co-created executive produced by Helms, Mike Schur (The Good Place) and Sierra Teller Ornelas, the series is set in a small town in upstate New York and the Native American reservation it borders. In the past two years, Greyeyes has made impactful and resonating appearances in a handful of critically acclaimed projects including recurring roles on HBOs anthology crime drama True Detective, opposite Mahershala Ali and Stephen Dorff, and the HBO limited series, I Know This Much Is True, opposite Mark Ruffalo. He also starred in the independent horror film, Blood Quantum, written and directed by Miꞌkmaq filmmaker Jeff Barnaby, which featured an Indigenous cast. The film premiered at the Toronto Film Festival. The groundbreaking film blends horror with sociopolitical subtext, imagining a world in which those with Indigenous blood are immune to a vicious zombie apocalypse. His other film credits include the Disney+ live-action film, Togo, about two of the key figures in the 1925 Nome Serum Run, andWoman Walks Ahead, where he starred alongside Jessica Chastain and Sam Rockwell, in A24 and DirecTVs western drama. In the film he portrayed Chief Sitting Bull, which follows widowed artist Catherine Weldon (Chastain) who travelled to North Dakota in the 1880s to paint the infamous Lakota Sioux Indian leader. Inspired by true events and directed by Susanna White, the film premiered in competition at the Toronto International Film Festival in 2017 and had a Special Gala Screening at the Tribeca Film Festival. He has appeared in numerous feature films, including The New World, directed by Terence Malick, Skipped Parts, Passchendaele and Dance Me Outside, a cult-classic directed by Bruce McDonald. On the small screen, Greyeyes will soon return in the second season of Apple Original mystery drama series Home Before Dark. He recently starred alongside Ian Somerhalder in the Netflix Original Series V-Wars, based on Jonathan Maberry's bestselling book. In its third season, Greyeyes joined the cast of Fear the Walking Dead, AMC's hit companion series to The Walking Dead. His other television credits include: Law and Order: Criminal Intent, Crazy Horse (TNT), and Tecumseh in Tecumseh's Vision (PBS) to mini-series such as Klondike (Discovery), Saints and Strangers (National Geographic), and Dreamkeeper (ABC). Born and raised in Canada, Greyeyes is Nêhiyaw (Plains Cree) from the Muskeg Lake First Nation in Saskatchewan. He graduated from Kent State University with a Master's degree in the Fine Arts at the School of Theatre and Dance and is also a graduate of The National Ballet School where he went on to join The National Ballet of Canada company. In 2010, Greyeyes founded a Canadian non-profit theatre organization, Signal Theatre, a company that explores intercultural and transdisciplinary live performance. He serves as the Artistic Director for the theatre. Greyeyes selected directing credits include A Soldier's Tale, from thine eyes and Bearing (Signal Theatre), Almighty Voice and His Wife (Native Earth Performing Arts) & the short film Seven Seconds (2010 imagineNATIVE Film + Media Festival). Most recently he was nominated for the Dora Award in Direction, along with his co-director Cole Alvis, for Two Odysseys: Pimooteewin / Gállábártnit a double-bill of two Indigenous language operas, with librettos by Tomson Highway and Rawdna Carita-Eira, respectively. Greyeyes is currently developing and will direct an exciting adaptation of Macbeth for the Stratford Festival in Canada titled: PAWàKAN, by Reneltta Arluk. He is an Associate Professor in the Department of Theatre at York University in Toronto, where he lives with his wife and two daughters.